This is an interesting post on my end, as many of you who have been reading for a while know that I have been a vegetarian since I was 13. I am asked often, “how do you get your protein?” but it’s actually a myth that animal based protein is the only good way to obtain protein.  The short answer is seeds, beans and nuts!  The story behind me becoming a vegetarian was that someone in my freshmen year high school biology class raised her hand when the teacher asked if there were any vegetarians and explained her point of view. I thought about it, didn’t like the idea of eating animals, and I went home that day and told my parents that I was not eating meat anymore, and never looked back!

But, I digress. Many people love meat!

But conventional meat as it is sold now, will make you sick.

Unfortunately, most animals are not living in humane settings.  They might be living in a pen of their own feces, then put on conveyor belts to slaughter.  Deeply stressed animals release cortisol and adrenaline which makes for tough dark meat – humans ingest the stress from the animals they ate. Have you heard, “You are what you eat?”  Stress from animals can actually translate into stress in humans.

Calves are given 14 months to get to ideal weight to slaughter, and since this is not natural, they are given antibiotics to grow faster.  They are also fed corn (usually GMO), liquified fat from slaughterhouse waste, and “milkshakes” laced with GMO soy, synthetic estrogen and growth hormones. Cows aren’t built to eat corn or grains, they are built to eat grass, so as a result, they get sick and are given more antibiotics to stay alive.  As a result, approximately half of the meat and poultry sold in the US is contaminated with highly dangerous microbes.  The bacteria is linked to human diseases.  Livestock account for 80% of the antibiotics that are sold in the U.S.  (Source: The Dirt Cure).  Humans who ingest antibiotics in meat are decreasing immune function and thus at a greater risk for disease and illness.

How to buy your meat 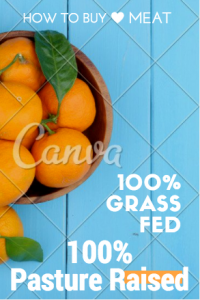 We don’t want to be eating antibiotics from the meat we eat, so look for pastured raised and pasture fed animals. Meat that is certified organic does not necessarily mean pasture fed or humane treatment, but it does mean there are no antibiotics or GMOs given to the animals.  Look for 100% grass fed or 100% pastured when you are buying meat. Try farmer’s markets so that you can ask how the animals were raised.