Organic is a rather new concept, but what exactly does it mean? Genetically modified organisms debuted in 1994, and glyphosate has been sprayed since 1974.  What do all of these mean, and what are the health implications? Should we be buying organic? Read on for all of the information! 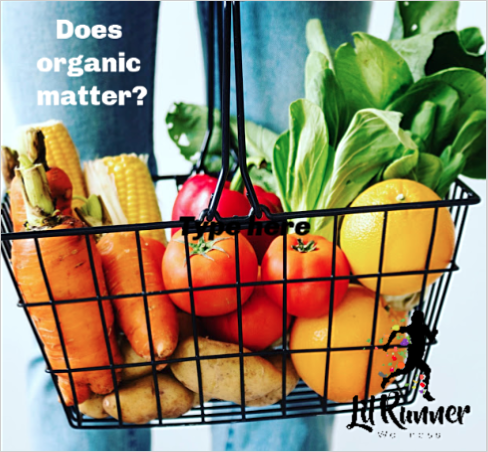 Organic means a food has been produced by approved methods and meets specific requirements, including what is in the soil, animal raising practices, the use of herbicides and pesticides and additives in foods.  The soil has to be clean for the three years prior to testing, and the animal feed has to be 100% organic.  For packaged or processed foods, these need to contain at least 70% organic ingredients.  It is important to read labels even on organic foods for this reason, and because not all organic foods contain great ingredients.

If a food is organic, it is also Non-GMO”

All organic foods cannot contain GMOs, but all non- GMO foods do not have to be organic.

GMOs or genetically modified organisms are organisms that have been modified by inserting a gene from another organism.  The genes can come from bacteria, viruses, insects, animals or humans. This insertion changing the functioning of other genes, and creates new proteins, which can create toxins and allergens.  Europe and several other countries have banned GMOs entirely, but the US only requires companies to designate non-GMO foods with a label, only recently.

As stated above, genetically modified foods change or damage proteins within the new organism, and have been linked to toxins, allergic reactions, and also sick, sterile, or dead animals in lab studies.  GMOs have already been found to have scary effects on humans, including ingesting the genes of the organism during digestion (2). GMOs have also been linked to the now common gluten sensitivity (3), a more current problem today, an endocrine disruptor (5) and ultimately cancer (4), which has been on the rise for decades.  The BT-toxin found in GMO foods kills insects by puncturing holes in their cells, and this toxin is able to get into the human body and puncture holes into human cells as well, causing intestinal permeability, problems with gut bacteria, immune system activation, allergic response, and digestive problems (3).  There are various other studies, linking glyphosate to chronic illness, autism, Alzheimer’s disease, Parkinson’s disease, inflammation and birth defects.

Could GMOs also be the cause of all of the allergies that children have today?

Most GMOs are designed to withstand heavy doses of Roundup, which, according to the World Health Organization, is a known carcinogen.

Glyphosate is the active ingredient in Roundup. Glyphosate has been found in 75% of rain and soil samples, as well as in the air we breathe. This presents a problem for human health in that it is not leaving the environment. In fact glyphosate is penetrating all of our natural resources, with no end in sight.  In the soil, glyphosate destroys the soil, and robs plants of nutrients.  When ingested by humans, it kills good bacteria and penetrates the gut-lining.  Glyphosate also soaks up manganese from the soil, and human mitochondria need manganese for optimal functioning.  Additionally, glyphosate blocks the shikimate pathway in soil, bacteria, fungi and plants, blocking the ability of plants to make the building blocks, our essential amino acids. As a result, our foods are becoming less and less nutrient dense.

Farmers who were exposed daily to glyphosate and were diagnosed with Non-Hodgkins Lymphoma sued Monsanto (1) and glyphosate is now linked with this cancer.  A groundskeeper at a school who was exposed to Roundup sued Monsanto and won (6) and many others have followed suit. How is this chemical not banned from our foods?  Most GMO foods are sprayed with roundup, so the two go hand in hand.

HOW TO AVOID THE EFFECTS OF GMOS and GLYPHOSATE

We can avoid the effects of these harmful killers by what we eat. Consider the EWG Dirty Dozen and Clean Fifteen when selecting produce. When purchasing wheat, grains or coffee, choose organic as these are heavily sprayed crops. Read the labels on processed foods, and choose organic most especially if the product contains any GMO crops.  Animal products, such as meat and dairy, should always be purchased organic. This considers what the animal feed has been as well as how it was raised. Animals who eat corn have concentrated corn toxins in their fat.  By making smart decisions, you can avoid GMOs and accumulate the least amount of glyphosate in your body.

What do you buy organic?